Pretty decent movie. Decided to watch it after I stumbled upon the brief Murdoch Murdoch review of it. For those in the Dissident Right it’s like watching a car crash in slow-motion because we know how it really screwed things up for us and we’ve already watched all the clips and interviews ad nauseam. And this time it’s even more frustrating because they act like the Alt Right is the one starting the violence. However, I was impressed with how they actually showed the cops doing nothing and letting the violence take place. Still, for an accurate breakdown with cited sources and even an independent report on the entire event click here: 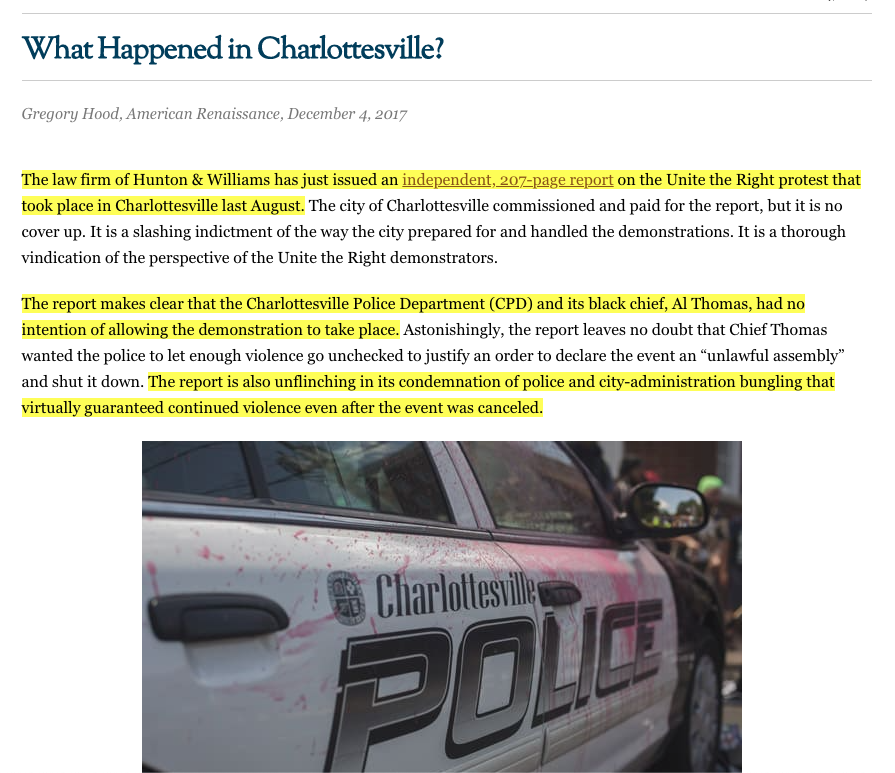 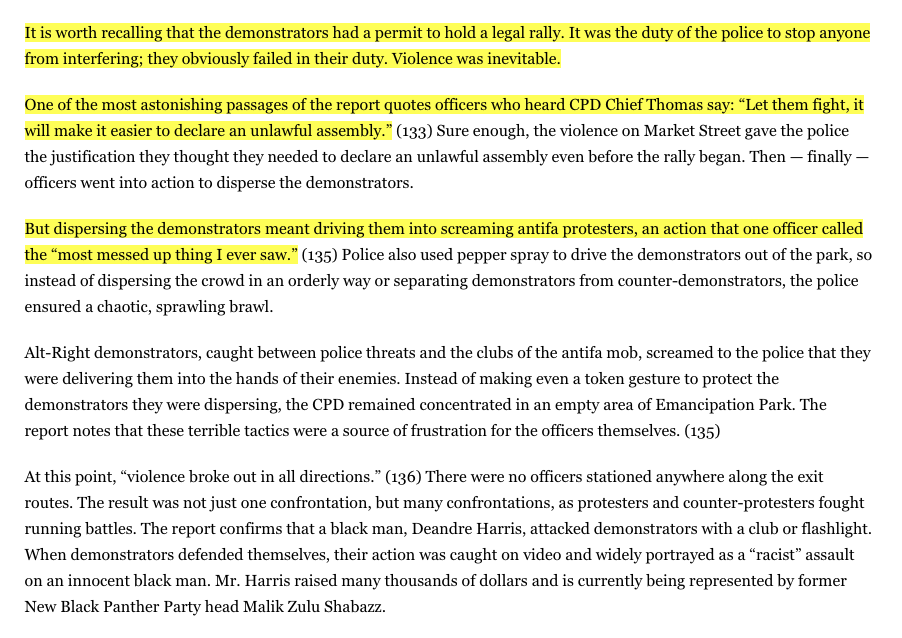 You can also confirm this from lefty NPR as well. And for a detailed breakdown of James Fields’ case specifically you can check out these Red Ice reports here and here. Basically some dumb kid trying to leave the rally was forced into AntiFa mobs due to retarded cops. You can see the brake lights on as he goes towards the crowd. It seems that he assumed the crowd would disperse, or perhaps he did want to run them over. But at the very least we can say he wasn’t accelerating into them at full force from the beginning. He was honking and pressing the brakes until some AntiFa punk hit the back of his car, he panicked and accelerated. Once he was mobbed by the crowd he reversed outta’ there.

Still dumb, and still should be charged. But the fat chick that died actually died from a heart attack, and wasn’t hit by his car. The kangaroo court case was just as corrupt and biased as the entire set of events that lead to Charlottesville being a loss for the Dissident Right. For a breakdown of that you can listen to “Alt Right Truth” interviewed by JF here, and him being interviewed by Mike Enoch here. But for the clip of the car crash breakdown you can just watch these two videos:

Charlottesville in a nutshell: 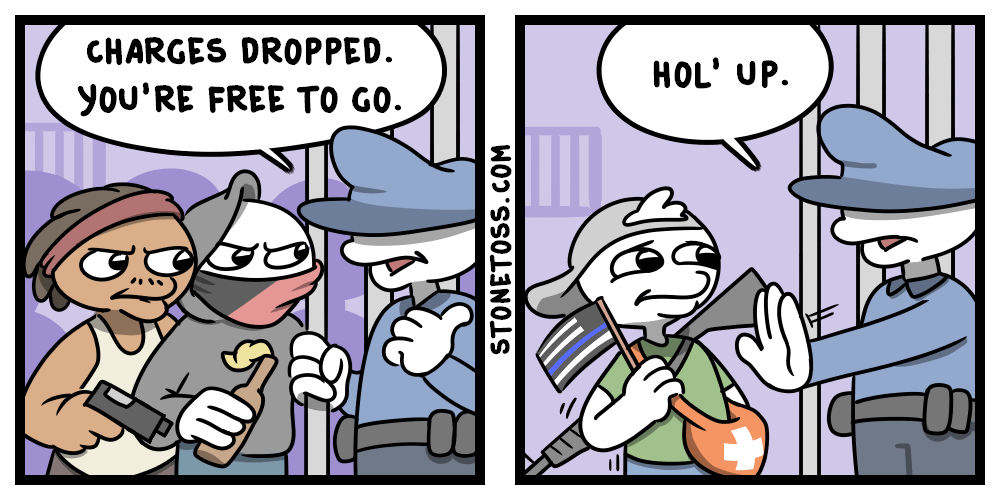 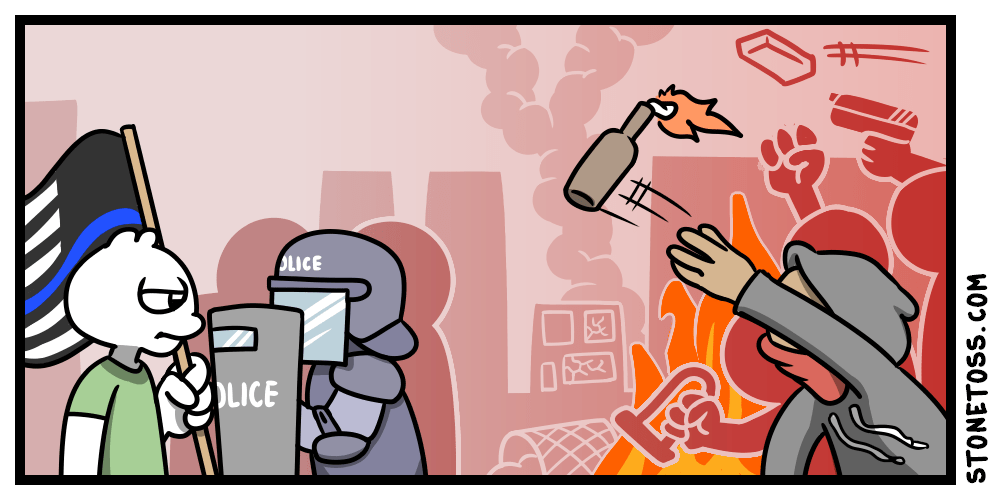 The absolutely revolting and unnerving SPLC Jew talking about how phrenology is fake science while being a perfect example of it was amusing. His bizarre George Lucas hair and excessively dexterous lips, all smashed together on a tiny munchkin face will leave you feeling queasy. 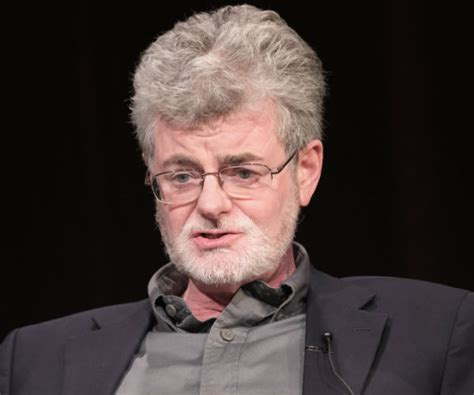 And this is old news, but I remember people pointing it out when the film first came out. If you look in the background he is tracking the decreasing number of Whites globally: 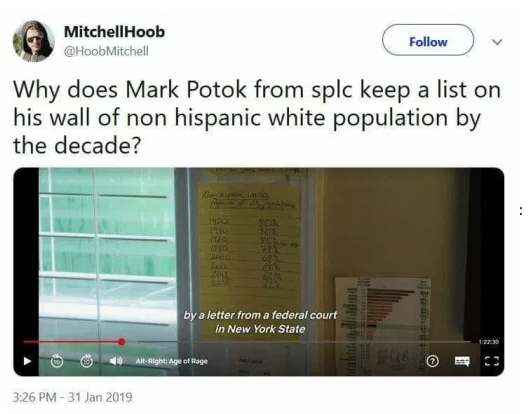 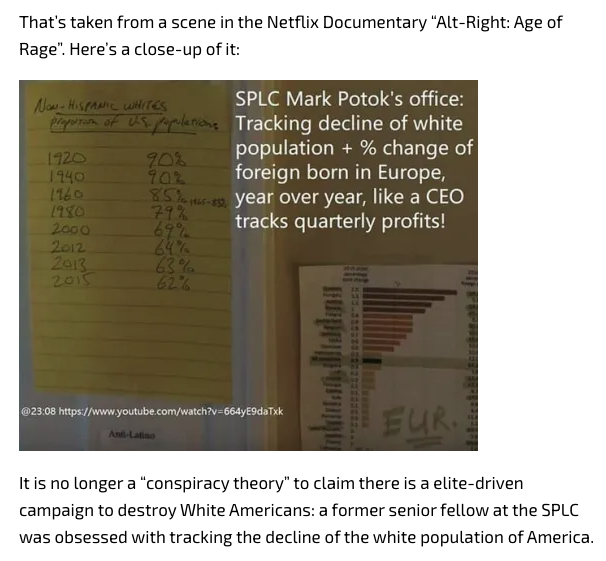 Really gets the ‘ol noggin’ joggin’…

And there are some cheap shots done through deceptive editing like when even the SPLC goblin was praising Jared Taylor for being a trilingual Yale alumni world traveler pacifist, the editor cut to him playing a saxophone in a silly parody song. Such scumbags. Oh well, in the end it only “humanized” the Alt Right like when Jimmy Fallon rustled up Trump’s hair.

Other than that I just want to address some issues with the repatriation criticism. Goblin George Lucas brought up a good point about India’s Muslim/Hindu partition. They are right when they say that violence is inevitable even in the best case scenarios. Maajid Nawaz doesn’t want the gravy train to stop so his intense reaction is understandable :

But to hear the other side, you can listen to Ryan Faulk (Alt Hype) explain how an “ethnostate” could be formed relatively peacefully. And he gives several examples of balkanization happening without violence in history. It’s worth noting that he has since changed his mind on advocating for an “ethnostate” and says that just balkanizing along political lines is more realistic and objectively better because of sh*tlibs. Both videos are linked above and all the cited sources are in their respective descriptions. Also, Greg Johnson’s “White Nationalist Manifesto” addresses the moral & logistical concerns very well, and I highly recommend the (audio)book. Lastly, although it wasn’t a mass exodus, a sizable chunk of unwanted Latino expats living in Japan were paid to leave and never come back. Not a single drop of blood was shed. Would reversing immigrant trends in such a manner be such a bad thing?

And to be clear, the term “ethnostate” is autistic and bad optics. It’s a redundant term that makes no sense to most people around the world and to any American prior to the 1965 Immigration Act that was forced on them. What we really mean when we advocate for repatriation and talk about White identity is really just wanting a homeland. Japan is not 100% Japanese and they don’t ethnically cleanse any non Yayoi blooded citizens. They just are not retarded about letting taco gremlins sprint across the border to score a 14th amendment touchdown by sh**ting out a baby. They don’t just let anyone and everyone vote in their elections. It’s common sense. So just as Jared Taylor has expressed discontent with the term “Alt Right” because it insinuates we are abnormal, I think it’s important not to use esoteric genocidal sounding terms with normies. 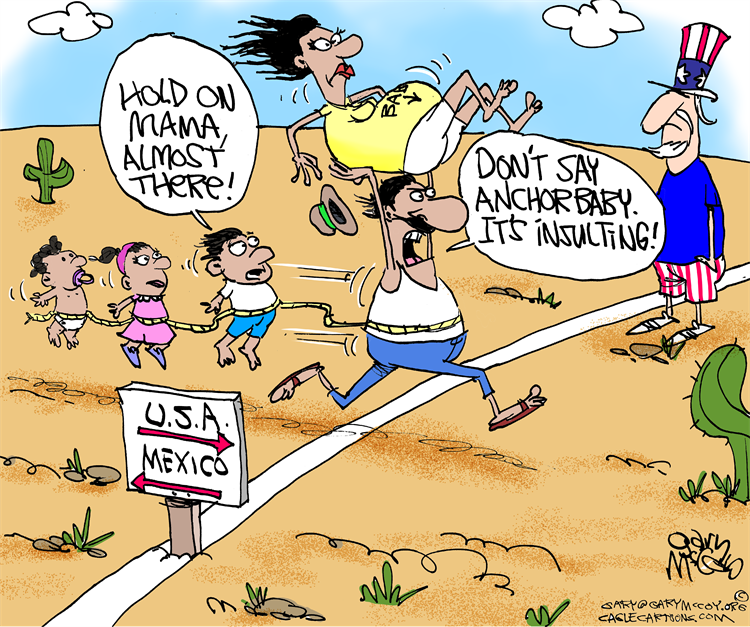 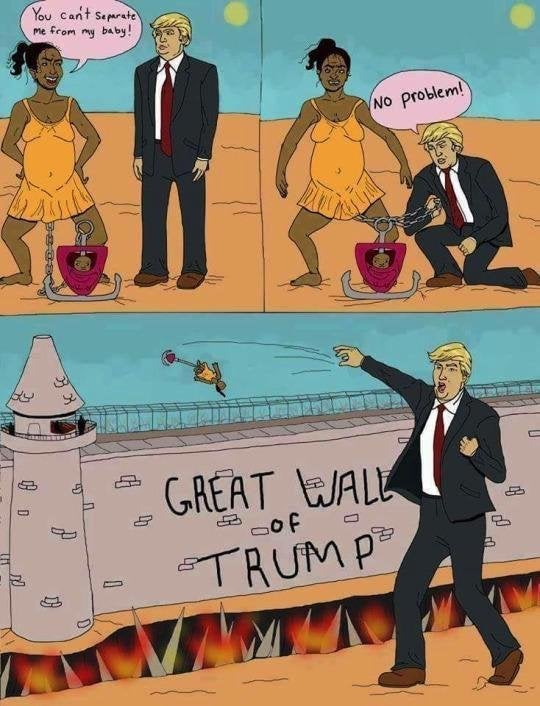 At this point, I think it’s pretty damn obvious that the media milking Charlottesville was just bias and slander. The cuckservatives now realize how often the lefty mayors set up Catch 22 situations, because during the George Floyd 2020 riots there was a car running over protestors like every other week. 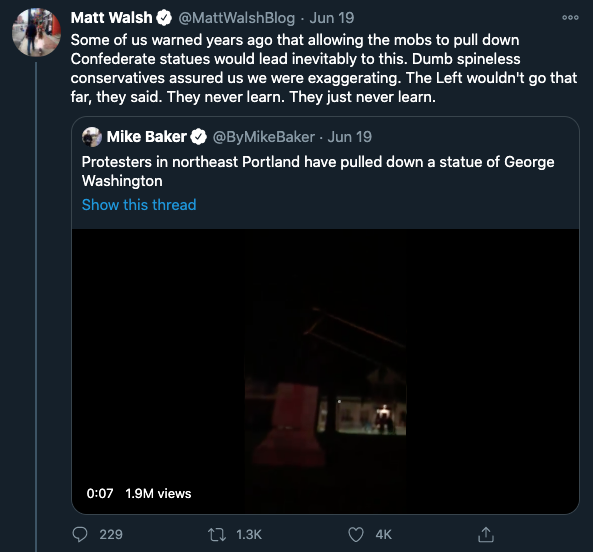 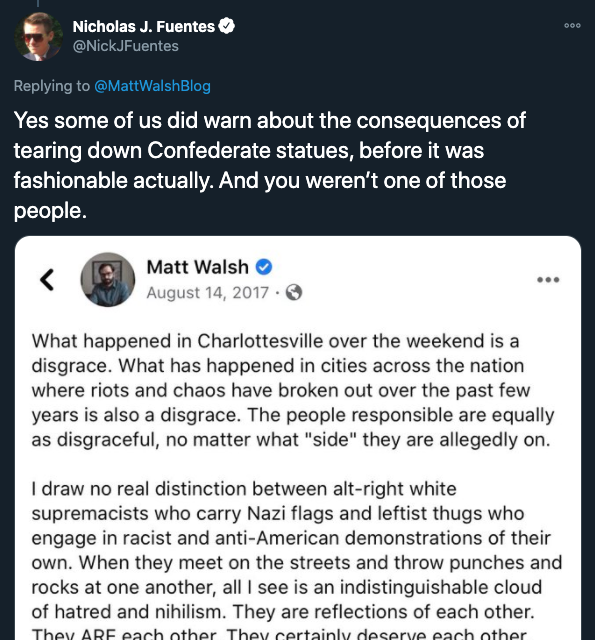 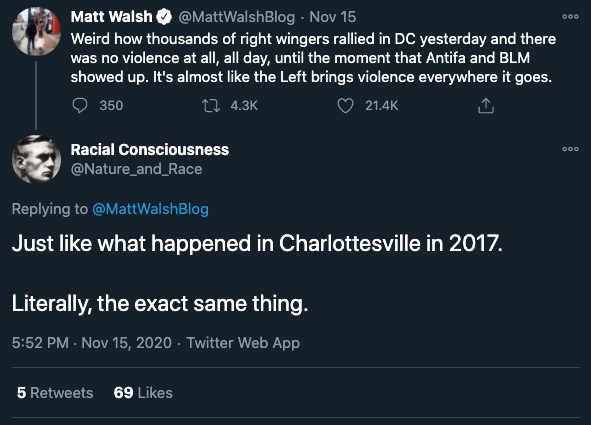 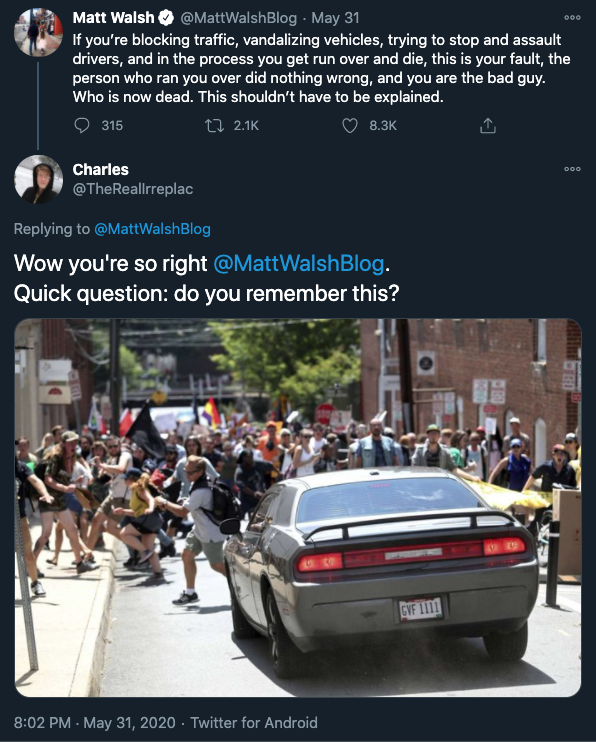 And for anyone who is still out of the loop, Steven Crowder did a great video proving that Trump did not say nazis were good people. Send it to normies who still buy the MSM narrative.

Anyways, decent film. Not insanely biased like the hit jobs VICE makes, but still not something you should support. I use the Netflix password of someone else and saw it was streaming so not sure if that counts as being a hypocrite but whatever. If you have someone’s Netflix password check it out, but you’re not missing out if you don’t. Watch this instead: