I was a big fan of the “Broken Windows Theory” explanation, (popularized by Malcolm Gladwell), of why crime was greatly reduced in the 90’s. But then I read “Freakonomics” and discovered their opposing theory that claimed legal abortion was the real reason crime dropped, since less unwanted hooligans born = less unwanted crimes committed.

Occam’s Razor and my gut say the abortion theory held much more sway. But what’s with the false ultimatum? Isn’t it just a percentage debate? Several factors lead to the decrease in crime, and abortion was just the biggest factor, right?

Idk. I started searching around and was surprised to find that a founding father of the race realist movement, Mr. Steve Sailer, was one of the earliest critics of the abortion theory. Strange, no? Most Alt Right type people are in favor of legal abortion for obvious reasons…

Steve may be a eugenics mad man and “pro-choice” for all I know; his beef is just with the “unreliable” source data. If you’re interested, here were some American Renaissance comments that helped sum things up: 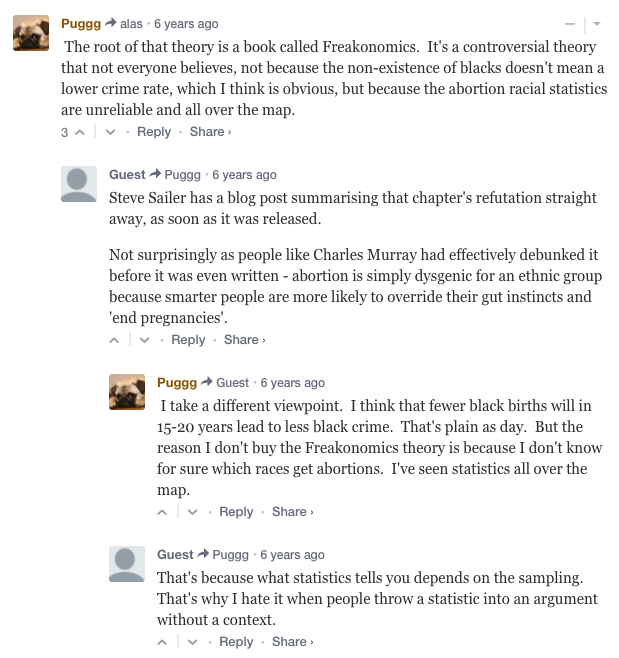 Likewise, here are links to both the Freakonomics and Steve Sailer posts that collect the back and forth of the ongoing debate between them. This is above my pay grade so I’ll let you decide.

You see, the filmmakers and their economist buddies tried to incentivize students to work harder by rewarding them with limo rides and hundreds of dollars. But to no avail.

For us “redpilled” folk, it seems glaringly unmistakeable why it didn’t work. They even address rampant cheating in Chicago schools early on in the film, and at one point prove that black sounding names make minimal difference (if at all) with respect to occupational success. And then right after that, unintentionally argued in favor of eugenics. But of course all throughout the film, they make sure to sprinkle in disclaimers and conclude each segment by pointing to a red herring and/or a non-causal correlation. For example, at the end of their bribing students experiment, you hear the economists brainstorming and suggesting that perhaps if they started the experiments earlier in the student’s lives it might work.

Think someone should tell them they’re on a fool’s errand and that there are already transracial adoption studies that prove the (much more evident) root cause of the performance gap consistent across all nations? Or is that exactly what they wanted the audience to do? Dropping subtle redpills via the Socratic Method? Doubt it…

Anyways, whether you disagree or not, they bring up a lot of intriguing theories and peculiarities. The section on Sumo wrestling was the most fascinating by far. Check it out when you have time!