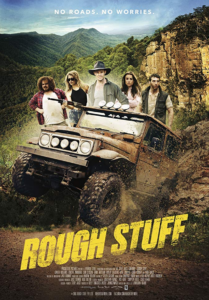 This enjoyable Australian outback adventure stars Gareth Rickards as Buzz, a rugged “rover” hired by a group of eco-activist weenies to get them across a difficult, mountainous terrain and to the site of a new American mining venture where they plan to film a documentary on the project’s environmental impact – and the sense of urgency to their mission gets ratcheted up a notch when Buzz realizes the group is being pursued by the relentless and enigmatic “Ranger” (Jono Cheal). The characters, though never developed too deeply, are likable enough, and the movie’s rapid pacing and wilderness setting prevent it from ever getting boring. Frizzy-haired slob Sam Glissan deserves a special mention, as well, for his supporting role as the salty and indomitable Scraps.

3.5 out of 5 stars. Ideological Content Analysis indicates that Rough Stuff is:

5. Abo-empowering. While whites are allowed to play the heroic roles, a bit of ethnomasochism does creep into the film at the end when Buzz, having discovered the site of a cache of gold, abstains from seizing the booty so as to let an elderly abo have it, the implication being that he is somehow more entitled to it for having a more organic and intimate connection to the earth. It is interesting to note, however, that Buzz nearly drives himself off of a cliff after virtue-signaling.

4. Green-ambivalent. Rough Stuff stops short of discrediting environmentalism altogether, but does suggest that those activist types drawn to such causes are frequently naïve, poorly informed, fanatical, or possessed of ulterior motives.

3. Anti-feminist. The comic supporting character Skye (Katie Garfield) represents feminists as obnoxious and unnecessarily combative. Not content to keep her viewpoints to herself, she more than once attempts to infect her more feminine comrade Tori (Hayley Sullivan) with her corrosive ideology, encouraging her to be more sexually assertive and insisting that the patriarchy has conditioned Tori to deny her true wants and needs. Skye’s militancy is revealed to be hollow, however, when – after stubbornly refusing to allow a man to carry her across a stream – she finds herself stuck and petulantly cries out for help. Her pampered stupidity, too, comes out when it suddenly dawns on her that there will be no ladies’ rooms available in the outback. Women can talk tough or even shoot guns, but ultimately require rescue.

2. Anti-corporate. The eco-activist group’s leader, Eric (Jamie Kristian), turns out to be plotting a terror attack on the mining concern – which plot in turn is revealed to be a scheme of the mining multinational to discredit conservationists. The corporation, in addition to staging a series of eco-terror false flags around the world and lobbying the Australian government for special privileges, is also skirting government regulations by initiating the exploitation of a new region before securing public permission

1.Populist. Rough Stuff gives audiences a masculine, self-reliant, working-class hero in Buzz, and the movie evinces a healthy distrust of both left-utopian activism and nihilistic, big-business concerns. Traditional sex roles are reinforced, as is the dignity of the rustic Australian as opposed to globalizing and cosmopolitan forces.