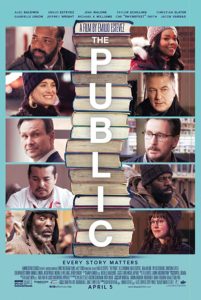 Try as it might to seem hip and relevant, Emilio Estevez’s hero-librarians vanity project The Public never manages to shake a vague feeling of being something slightly quaint left over from the 1990s. Estevez, in a role perhaps intended to reference the actor’s iconic turn as a cool school library detainee in The Breakfast Club, appears as an idealistic but hardship-weathered employee of the Cincinnati Public Library whose personal and professional ethics are tested when a mob of crazy homeless men occupies the facility and demands to be allowed to use the library as an overnight shelter on a bitterly cold evening. Curiously, writer-director-producer Estevez appears to cling to the outmoded liberal convention of the white savior coming to the aid of downtrodden blacks and browns – in 2019. Star-power casting, with Christian Slater and Alec Baldwin also appearing, make the movie more watchable than it probably deserves to be.

3 out of 5 stars. Ideological Content Analysis indicates that The Public is:

Green. Annoying but well-meaning millennial chick Jena Malone rides the bus to work to reduce her carbon footprint, and the presence of a taxidermied polar bear (“Beary White”) in the library serves to remind the viewer of wildlife impacted by melting ice caps.

Anti-drug. One subplot involves the search for a missing opioid addict (Nik Pajic). Estevez’s character is also revealed to be a recovered alcoholic who once lived on the streets.

Media-critical. A self-promoting local reporter (Gabrielle Union) intentionally misrepresents the protagonist’s stance of solidarity with the homeless, leaving viewers with the impression that he is a madman holding hostages inside the library. Her cameraman (Ki Hong Lee) objects, but is ultimately complicit in the duplicity. Provocatively, the term “fake news” is applied to the mainstream media rather than to independent commentators.

Communist. “To each, according to his needs” is very much the moral of the film.

Racially confused. The Public represents a partially naïve effort at postracialism while also including distinctively anti-white elements. Against expectation, the film casts black actress Gabrielle Union as the unlikable reporter – showing that blacks can also be bad – but other blacks in the movie appear well-intentioned or victimized, with some depicted as harmlessly insane. Jeffrey Wright, however, appears as a polished and capable black library director. Christian Slater plays a slickly dressed law-and-order prosecutor and mayoral candidate who, though his political party is never mentioned, represents a heartless all-white Republicanism that must eventually give way to a more inclusive vision represented by his compassionate black political opponent.

Oddly, the movie opens with an angry black rapper shouting “Burn the books!” and ranting about tearing down monuments as various unfortunate street people appear queuing up to get into the library and out of the cold. The rap’s apocalyptic vision forecasts what is presumably the fate awaiting reactionary whites who fail to get “woke” and join the fight against inequality. European-American literary heritage in The Public is a universal legacy and an inspiration for all of “the people”, but Europe’s classical civilization is also insulted. The setting of Cincinnati invokes Cincinnatus, the exemplar of selfless public service, but the name “Athena” – evoking the Greek goddess of wisdom – is given to an eccentric old anti-Semite (Dale Hodges) who suspects those around her of belonging to “the Tribe”, while another of the vagrants (Patrick Hume) is nicknamed “Caesar”, with antiquity symbolically displaced, homeless, and reduced to pitiable madness in the context of multicultural modernity. A library book defaced with a swastika, meanwhile, reminds viewers of the persistent threat of white bigotry.

More interesting is the treatment of the preserved polar bear, “Beary White”, which – whether intentionally or otherwise – evokes “polar bear hunting” or the anti-white “knock-out game” in a ghettoized urban setting in addition to bolstering the global warming messaging. The film concludes with a shot of the towering, fierce, and triumphant-looking polar bear, which is perhaps intended to symbolize the moral victory of white-liberal-savior-with-soul Emilio Estevez, who redeems himself and his race and hopefully avoids the hunt by self-sacrificingly taking up the cause of impoverished minorities. The irony of such an interpretation is that the life-like bear is merely a feat of accomplished taxidermy and that the once-majestic creature is already dead inside.