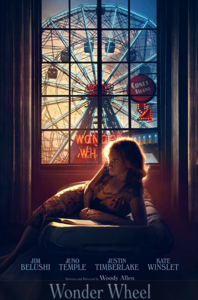 I have mixed feelings about Allan Konigsberg. Revelations about his sexual proclivities as well as my own awakening to the director’s participation in a massive tribal project of hostile culture distortion make it impossible for me to like “Woody Allen” the way I did when I was younger; but it would be dishonest of me to pretend that his body of work did not influence my intellectual development. Coming from a blue-collar Midwestern background, Konigsberg’s stories of New York sophisticates were exotic and illuminating. His movies made me want to become a literate person so that I could be witty and impress complicated women. And – as much as I dislike to concede it – he has continued to produce worthwhile entertainment well into his decrepit years.

Wonder Wheel is no exception, and offers exactly what those familiar with the writer-director’s filmography have come to expect. Its tawdry tale of two shiksas – older, married woman Kate Winslet and naïve stepdaughter Juno Temple – who both fall for sophisticated and handsome Jewish aspiring playwright Justin Timberlake contains a great deal of Hebraic wish-fulfillment, particularly with Jim Belushi portraying the boorish and slovenly goy alternative. Set in the bustling Coney Island of the 1950s, Wonder Wheel is both a rather painful melodrama and a comfortable nostalgia piece, evoking fondness both for America’s past and for Konigsberg’s, so that the whole experience seems like old times.

Ideological Content Analysis indicates that Wonder Wheel is worth seeing if viewers can do so without putting any money into the filmmaker’s probably candy-filled pockets. Also:

Anti-drug. Looming over Ginny (Winslet) and Humpty (Belushi) throughout is the specter of alcoholism which threatens to reassert itself over their wills in times of stress. Ginny embarrasses herself in a drunken state at the end of the film.

Borderline pedophiliac. Juno Temple, like previous Konigsberg muses Mariel Hemingway and Christina Ricci, evinces a childlike presence despite her experience. The word “Toys” is visible in a shop window in a scene in which Mickey (Timberlake) picks up Carolina (Temple) to give her a ride, slyly emphasizing her youth.

Anti-family, anti-marriage. “Don’t ever have kids,” Ginny advises. Marriage, too, is “scary”. Ginny is only “going through the motions of lovemaking” while she has “so much to give” to a smart and beautiful Jewish boy. Ginny also insinuates that Humpty has incestuous inclinations toward his daughter when she accuses him, “You treat her like a girlfriend.”

Anti-white. Carolina rejects the “dull, colorless, boring [i.e., WASPish] guys” her father would have preferred she marry. Instead, she falls in love with a tribesman. There is a sort of malicious glee in Konigsberg’s decision to name the head of the household “Humpty”, presenting the American father of yesteryear as a gruff and abusive but fragile figure destined to fall and never to be restored to his previous station. Humpty distrusts the influence of movies and radio – i.e., the Jewish-dominated mass media – on his family, calls psychology a “phony head doctor” racket, and is probably therefore suspect in Konigsberg’s imagination as a potential anti-Semite. Carolina’s son (Jack Gore), meanwhile, is a little pyromaniac – symbolic of the potential of every goy boy to grow up to perpetrate the world’s next Holocaust. Sadly, waitress Carolina must endure the indignity of serving “redneck clowns” in her clam house – representing the ever-present threat posed by rustic deplorables infiltrating and crudely stinking up the nice, respectable, kosher stronghold of New York City.