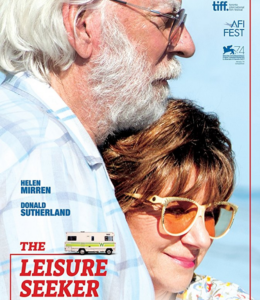 The Leisure Seeker is little more than a piece of scurrilous hate mail that disguises itself as a valedictory love letter to the Baby Boomer generation. Donald Sutherland and Helen Mirren play John and Ella Spencer, an elderly couple whose twilight years are rapidly fading to black. John is a retired literary scholar whose intermittent lapses of long- and short-term memory at times reduce him to petulant childishness, and Ella is dying of cancer and getting by on pills and alcohol. Conscious that they both have little time left, Ella, without informing their worried son and daughter, is taking a final road trip with John to Key West for a life-and-death-affirming pilgrimage to Ernest Hemingway’s house. The title refers on the literal level to the Spencers’ gas-guzzling motor home and on the figurative level to hedonistic selfishness as the outmoded vehicle in which the Baby Boomers tripped, crashed, and will righteously burn. Morbid vitriol thinly veiled as bittersweet dramedy, The Leisure Seeker will hold the most appeal for the unperceptive.

3.5 out of 5 stars. Ideological Content Analysis indicates that The Leisure Seeker is:

Gun-ambivalent. Ella defends herself against redneck highway robbers with a shotgun, but the senile old man’s access to the weapon is intended to cause the viewer anxiety, and Ella discards the shells after the would-be muggers have gone. Guns, if permitted at all, should be placed in women’s responsible hands, the movie appears to suggest.

Pro-gay. It is strongly insinuated that the Spencers’ cake-baking son Will (Christian McKay) is a homosexual. Ella is not only unperturbed, but seems to be fond of the idea.

Pro-miscegenation. John and Ella barge uninvited into a retirement home to visit her black ex-boyfriend, Dan (Dick Gregory), who, as it turns out, does not even remember who she is. Ella’s wistful expression on seeing him again makes clear, however, that her memories of him are dear.

Anti-white. The Leisure Seeker evinces resentment and distrust toward the Baby Boomers, whose revolutionary potential and openness to new experiences have ended in mindless, maudlin conservatism. The film is set shortly before the 2016 presidential election and a tacky pickup truck flying Trump flags rolls into view during opening credits as Carole King can be heard lamenting, “it’s too late, baby, now it’s too late, though we really did try to make it.” In a later sequence, John, in one of his absent states, confusedly wanders into a crowd of Trump supporters robotically chanting “USA! USA!” and seems to be enjoying himself until his wife retrieves him like a mother apprehending an errant toddler. This is the film’s representative Trump voter: a senile and disoriented bumbler in need of supervision. Disingenuous appeals to Boomer nostalgia are inevitably undermined, as when John and Ella’s attempt to resuscitate the disco spirit makes her nauseous and causes their dance to be interrupted when she abruptly vomits. Displaying their insensitivity to the people of color oppressed by their hegemonic ancestors, John and Ella visit a theme park simulating colonial America and blithely ignore the background actors performing as toiling negro slaves. Their self-absorption reveals that the Boomers have failed to make amends and that further generational redress will be necessary. They repeatedly bore and annoy the younger and browner people around them, such as when John insists on discussing Hemingway with strangers in restaurants. In one key scene, however, John encounters a bright black waitress who turns out to be a Hemingway scholar herself (as contrasted with a ditzy white waitress featured in a previous scene). When John suffers a memory lapse and cannot recall a passage from The Old Man and the Sea, the black waitress finishes his thought for him, demonstrating that the white man has become a redundancy and that non-whites are fully capable of serving as the repositories of high culture going forward. 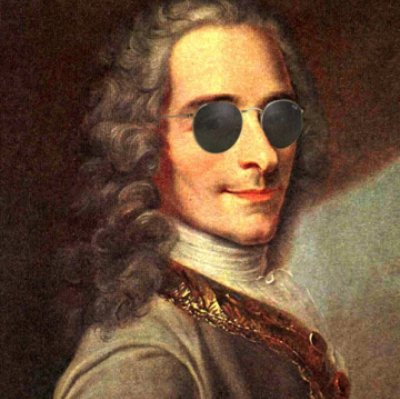