To start off with something lighthearted I noticed, this musical is full of spoken word songs. Not sure if it was planned or if it was just because some of their actors couldn’t sing. But it creates a unique film-watching experience, and is one of the many nuances that make this cartoon seem suitable for adults. But that’s also probably why none of the songs are memorable…

I guess in some operas there’s a very difficult technique only pros can pull of called Sprechgesang or the twelve tone technique.
Here’s an example (no need to watch the whole thing):

I think it’s like abstract art. Sometimes it truly is a sign of skill and artistic genius, but often it just seems like an untrained moron. After some googling, it looks like others felt the same ambivalence to the singing on display: 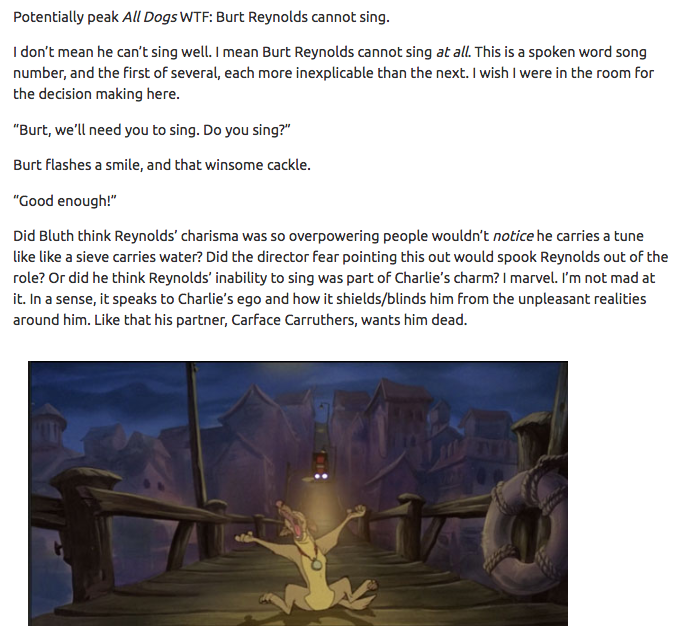 Before the complicated Sprechengang technique was invented, there were lesser forms of half singing throughout history. I have a feeling that “All Dogs Go To Heaven” lies somewhere in between. Reynolds certainly isn’t skilled enough to do the fancy 12 Tone Technique, but it seems like a conscious choice made by Don Bluth to keep the film down to Earth. Who knows? But here’s some interesting trivia from TV Tropes:

Alright, two other fun things before we get to the dark and depressing:

There were politically incorrect jokes at the expense of 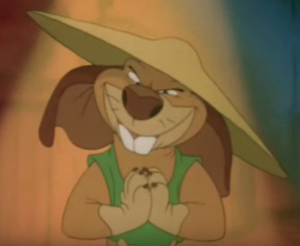 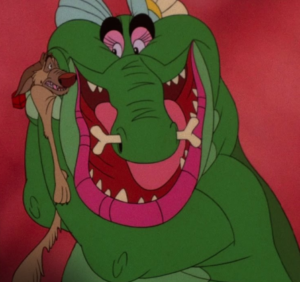 Ah, the good ‘ol days! When gender bending was for comic relief.

Now for the pizzagate stuff. So, I was reminded of an alleged child trafficking camp found in Arizona while watching this scene:

If you have never heard of this Arizona discovery, here’s a quick run down:

> Veterans searching for homeless vets stumble upon a child trafficking camp in Arizona
> Turns out there are lots of connections with the Clintons, Rothschilds, NXVIM cult, etc.
> This info starts spreading around the net and vigilantes/investigators show up to assist
> Suddenly a serial killer goes on a spree and happens to “””coincidentally””” kill JonBenét Ramsey’s psychiatrist

If you want to know more, here are some links & in depth summaries: ⬅

Alex Jones said it was a honey pot.

But Alex has tried to distance himself from anything related to these pedogate investigations, ever since James Alefantis’ lawyers threatened to sue. So take his disavowal with a grain of salt, (as you should with pretty much everything you read online).

The Vet who found the trafficking camps is known for activism and political stunts.
(But the guy seems legit and to just really care.)

Go to top
My disclaimer / conclusion on pedogate:

I got burnt out with pizzagate investigations a while back and have been trying to take breaks from politics off and on for the past year. 90% of political stuff is speculation or things out of your control and just gets you stressed for no reason. So I try to focus on this site instead of just raging at some migrant crime article or degenerate SJW. I’m plenty redpilled, and at a certain point you’re not being informed, you’re just addicted to the feeling of superiority/outrage. But alas, it’s my passion and borderline addiction, so I never successfully go cold turkey from politics. Which is why I know about this Arizona thing. But I am not up to date or fully aware of where the pedogate investigation has gone since 2017. Just vaguely.

Having said that, I still firmly believe the Clinton Foundation and many other corrupt elites in Media/Government are involved in child trafficking. And every new whistle blower that comes out affirms this more. Whether you think it’s a satanic cult or not doesn’t matter. Who cares if these freaks get their kicks by LARPing as satanists or if they actually are satanists? 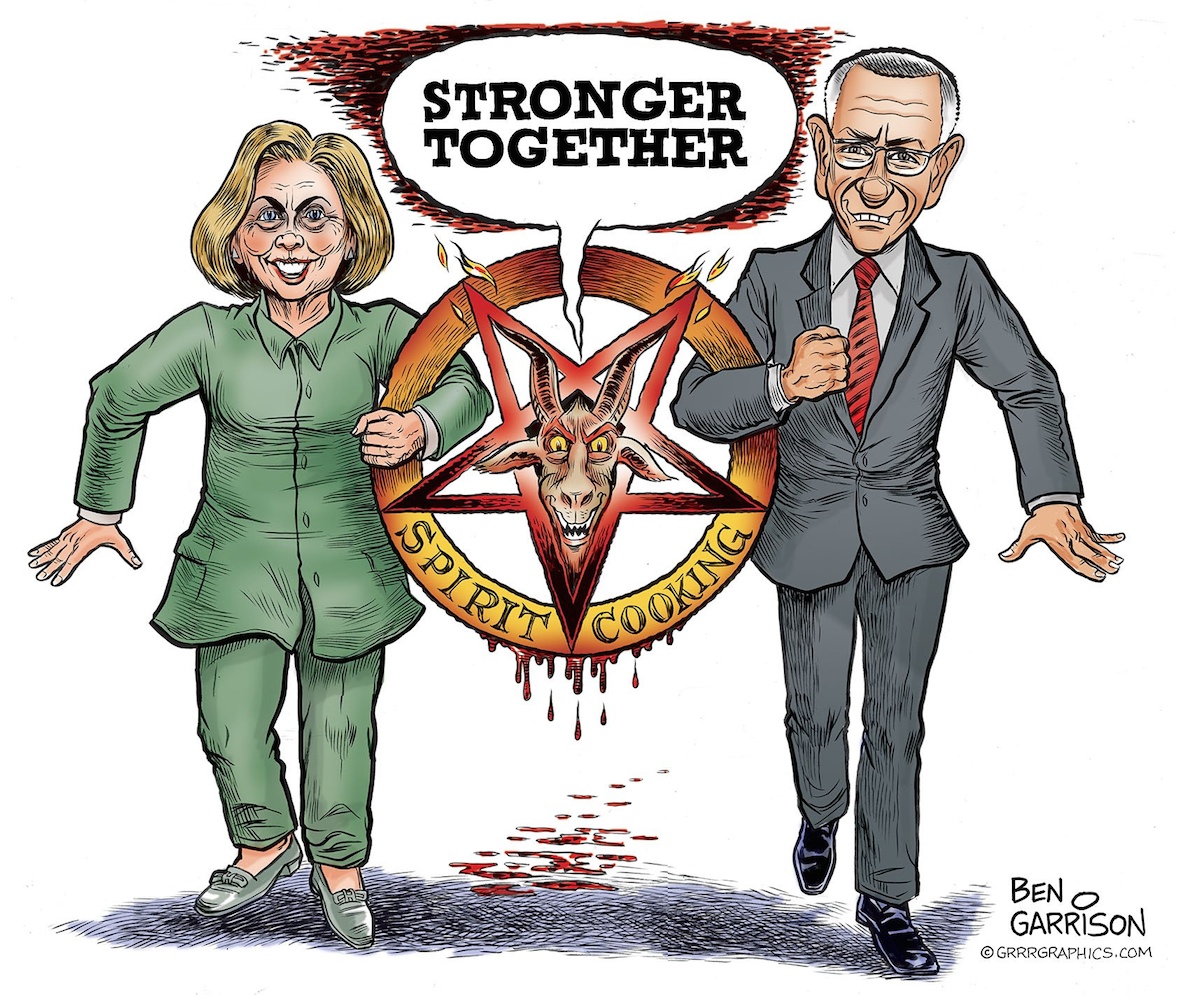 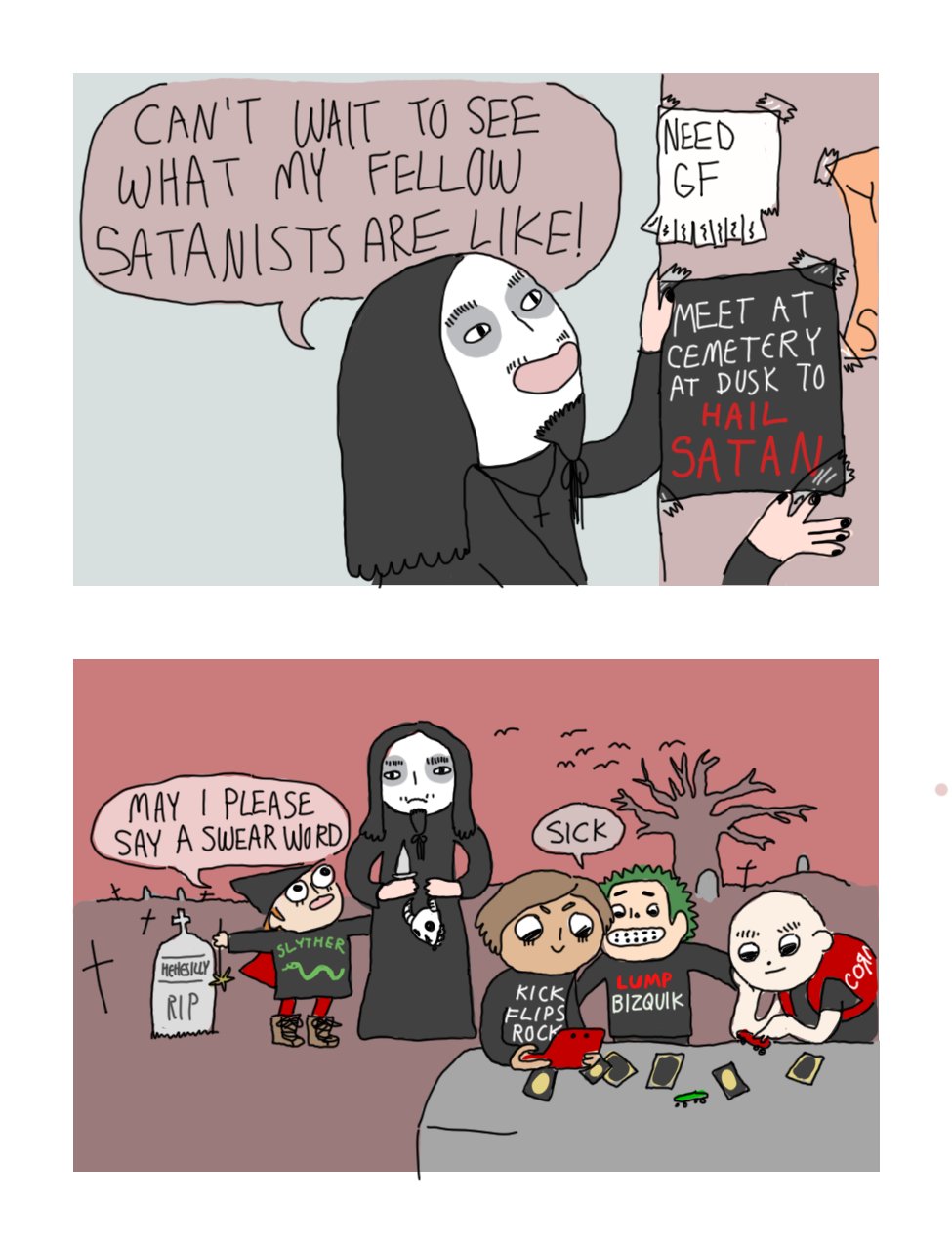 To me, what’s important is that there’s enough proof to conclude that many of them are actual pedophiles, and some are even murderers. As Paul Joseph Watson points out, there are plenty of proven, real world examples of this being the case, so is it really that far fetched?

Anywho, please research and make up your own mind. Aimlessly googling will bring up flat Earther whack jobs, or FakeNews MSM “””debunking””” links. I suggest starting with Ben Swann’s 5 minute, objective summary that aired on CBS News. And then with watching the Netflix documentary “Who Took Johnny?“

Unfortunately, being redpilled ruins pretty much every movie for you. And you can’t help but be reminded of all the sh*tty hard truths you know, even during intended leisure time. Often for no real reason at all. But this time, the connection my brain made might not be a fluke. 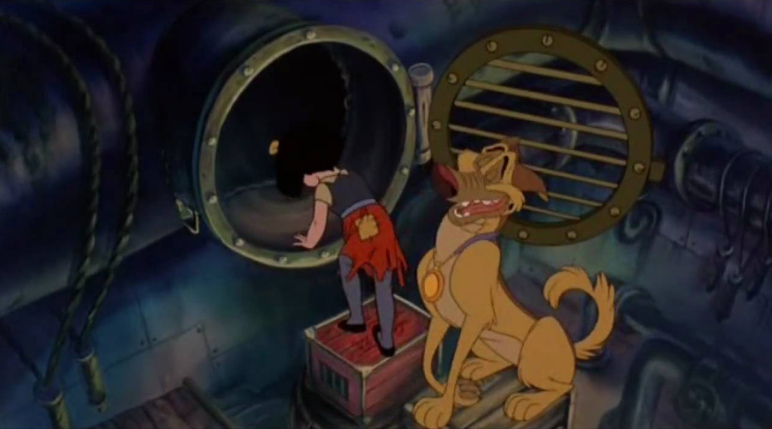 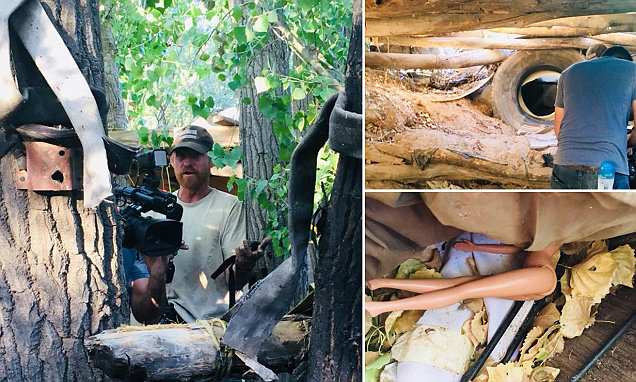 It turns out the child actress (Judith Barsi) was murdered by her “abusive” father when “All Dogs Go To Heaven” was in production. Now, based on what Corey Feldman and other whistle blowers have said about rampant pedophelia in Hollywood, one can’t help but wonder if Judith is somehow connected to this grand pedogate investigation. Did her father kill himself out of guilt? Psychosis? Or was it a potential cover up like the JonBerét Ramsey psychiatrist murder?

Well, after some duckduckgo-ing, it looks like I’m not the only one who suspects foul play.

This one is less circumstantial evidence and much more hearsay, but here’s a quick run down:

> There are several conspiracies and supposed contradictions surrounding Judith Barsi’s murder
> Some say it was a satanic murder on account of her being burned alive
> Some say that the alcoholic father was framed
> Some say the autopsy photo was faked
> There’s an anonymous source that leaks rumors and claims to be a Hollywood lawyer
> According to him, Stephen Speilberg is a pedo freak and abused Judith among others
> Apparently another Speilberg victim, (the little girl from poltergeist), was anally raped to death

This is an ongoing investigation so check for updates elsewhere, but here are some links & in depth summaries: ⬅

Who knows what really happened to Judith…

I guess I’m glad I was unaware of her murder before watching this classic. But the film in and of itself is already pretty heavy and full of tearjerker moments – with or without pizzagate thoughts in the back of your head.

If I ruined this film for you, let me suggest a new way to view it.

One of the theories about her death is that the father was a an alcoholic a**hole but not an abuser. And according to the official story, he managed to stay sober for a bit before her death. Steps 4 through 10 of Alcoholics Anonymous are all about doing deep introspection and facing ugly truths about your life. I’m not saying her father went to AA, but that it’s likely that many of the parents who pimped their children out to Hollywood must have done mental hula hoops to do so. Often members of AA discover they were trying to repress bad memories (both harm they inflicted upon others, and harm inflicted upon them). According to this anonymous whistle blower, Heather O’Rourke may have died because her parents naively believed the lie they were told about her illness. As American Beauty points out: “Never underestimate the power of denial.” 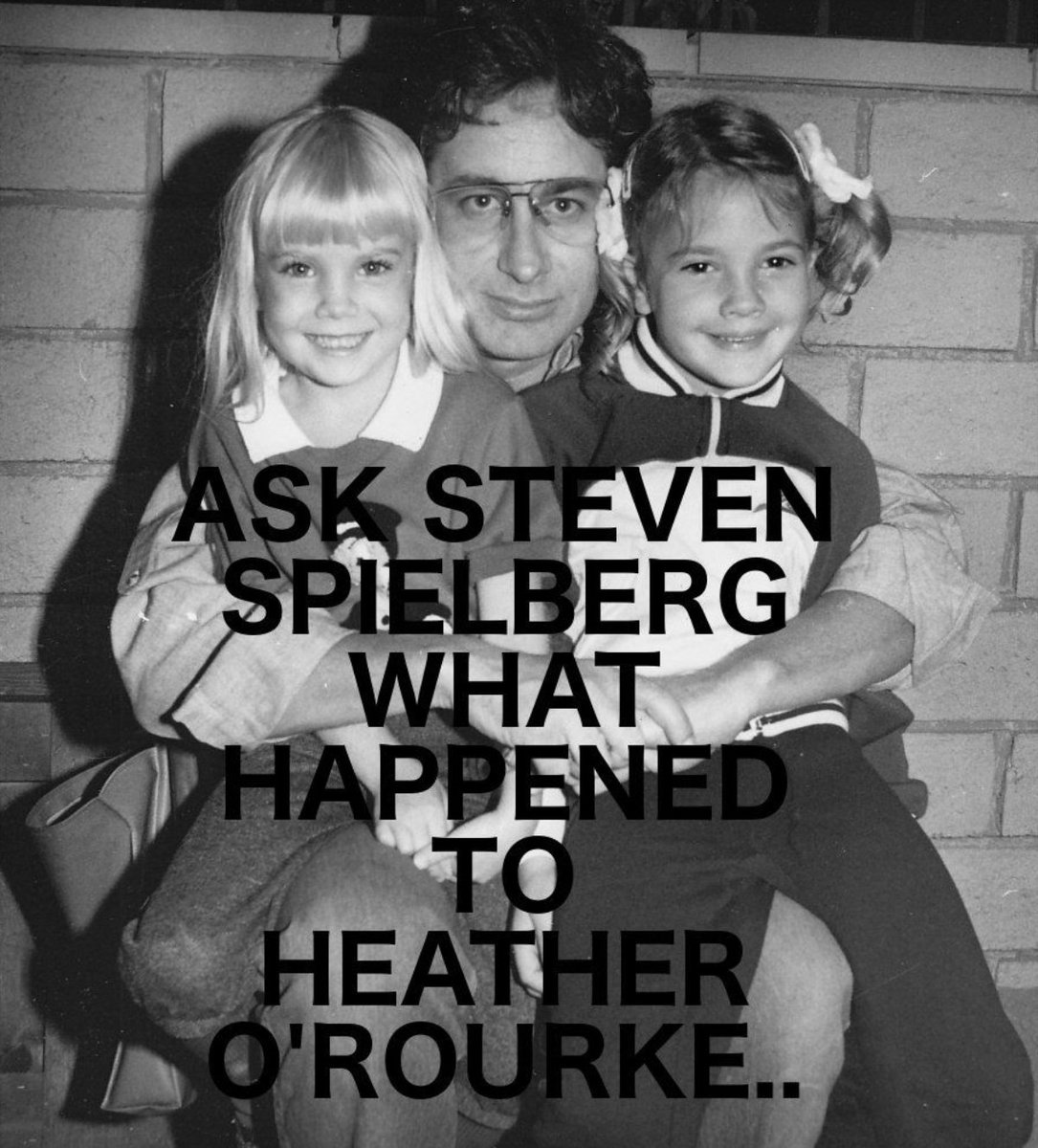 So perhaps he came to grips with the pedophilic exploitations of his little girl in his moment of clarity, and tried to rescue her. Maybe he had a redemptive transformation, (much like this film’s protagonist), and was seen as a threat to the Hollywood child trafficking racket. Seems like a very reasonable motive for someone to kill the entire family; and a drunk with a bad reputation like Judith’s father is the perfect patsy.

According to trivia from TV Tropes:

As far as the little girl in the cartoon, it shouldn’t be hard to make the mental leap ‘cuz of what IMDb states: 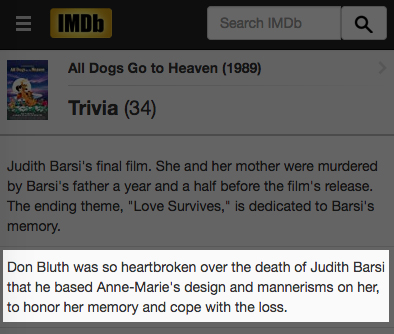 To be honest, it’s quite the stretch. California is a cesspit full of corrupt and disgusting people, so it’s not hard for me to be skeptical of the LA Times articles about Judith’s father, or the police reports. But her father’s first wife wrote a book and discusses his abusive nature which lead to their divorce. The whole thing is tragic, and it’s possible that everybody in Judith’s life was a piece of sh*t. But at least now you have an alternative theory to make the film digestible.

Too bad it’s too late to boycott this movie. Besides, the parent companies are complicit, so if your intentions are to make a statement against sexual abuse you should really boycott all of Hollywood. Cancel all your subscriptions and torrent everything that’s not an indie release. But since these custom ratings are meant to focus on giving Hollywood a message about liberal propaganda and affirmative action, I guess you can pay for the DVD if you so choose. Maybe Don Bluth is a good guy and he gets royalties. Tough call. I say just watch it if it’s free.

Anyways, hope you enjoy the film despite all its baggage. Either way, lemme’ know what you think in the comments below and post your own theories/connections if you have ’em.