Meh. Pretty entertaining so if you want to pay for it you can. It’s what you’d expect a buddy cop sequel to be. I gave it gay ratings only because they made fun of a flamboyantly gay stereotype. Not PC at all, and no pro gay agenda. As for the other ratings, one could argue that Jackie and Chris are affirmative action hires right off the bat, and the movie is full of non whites. So it should get 5/5. But since both of them feel like they truly are funny and truly earned it, I didn’t consider them in my affirmative action rating. The 2 point score is because of all the side characters in the film. It’s much darker than the first Rush Hour.

Oh. I guess I should also give a heads up, in case you’re a nationalist Asian man reading this, because you may put off by the aggressively sexual black man creeping on local woman throughout the movie. But as an anti-feminist, I thought it was just light hearted sexual humor. Chris had the same tendencies in his “Friday” movies with black women. So try not to get too uptight about it. For me, as an anti-feminist, I miss the days when those jokes were allowed so I thought it was funny. Idk, just depends on the viewer I guess. Speaking of which, one other thing I noticed, (now that I’m hip to the JQ), was how out of place this scene was:

It was clearly just an inside joke for the (((small community))) who runs Hollywood. It didn’t really make sense with the rest of the film or his character. No big deal, but just stood out to me, that’s all. And I guess I’m not the only one who was confused by it: 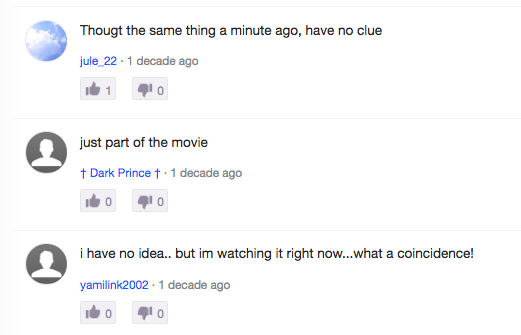 All in all, I think it’s worth checking out. And I look forward to watching the 3rd one soon. These guys really do have great chemistry and are fun to watch. Everything mentioned above is only the kind of stuff that red-pilled weirdos would notice, so you shouldn’t be pulling your hair out upon viewing. T’sall easy to brush aside…

So watch it for some decent nostalgia vibes if you feel like.