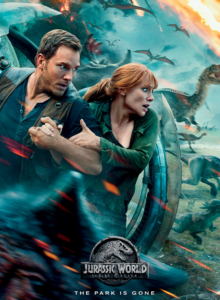 Star-Lord (Chris Pratt) is reluctantly recruited by ex-girlfriend Gwen Stacy (Bryce Dallas Howard) to rescue as many species of dinosaurs as they can from Isla Nublar before the island’s volcano erupts. The enterprise is being bankrolled by a mysterious philanthropist (Rafe Spall) – but is his offer what it appears to be? Most importantly, can the unfossilized and feral creatures be contained after they are transported to safety? Jurassic World: Fallen Kingdom delivers the mayhem fans are expecting and more, with the volcano’s explosion providing the perfect pretext to fill the screen with giant reptiles of every variety as they scurry and stomp for their lives.

4. Feminist and pro-miscegenation. Representing the Coalition of the Fringes are a tattooed Latina man-hater (Daniella Pineda) and a nebbishy mulatto computer whiz (Justice Smith).

3. Anti-white, anti-gun, and animal-rights-militant. Ted Levine appears as a “great white [sic] hunter” whose hobby of assembling necklaces from the teeth of endangered species earns him a dinosaur jaw’s worth of trouble. Guns, in addition to being unreliable, are problematic in the possession of trigger-happy white men in particular.

2. Disingenuously antiwar but actually anti-Slav and neoconservative. The dinosaur rescue operation turns out to be a nefarious military-industrial plot – what? social justice hijacked for capitalist plunder? I’m shocked! – and the movie climaxes at an auction at which arms procurers from around the world bid on weaponizable reptiles. Present at the auction are representatives from Russia, Slovenia, and Indonesia, the world’s most populous Muslim nation. “Too many red lines have been crossed,” as well – ostensibly with regard to Frankenstein genetic science, but probably also in reference to Syria.

1.Racist! Bookending the film are testimonies from learned elder of science Jeff Goldblum, who warns that humanity, by saving the dinosaurs, is risking its own extinction. Underlying the film is the West’s anxiety about the acceptance of “refugee” populations from the Third World. The dinosaurs, as savage, prehistoric animals – rather like Africans, the film seems to imply – are objects of both amazement and civilizational trepidation. Indicative of the mingled fear and excitement experienced by mentally ill social justice warriors in the presence of rapefugees is an unsettling scene in which a dark-colored dinosaur creeps into a little girl’s room and hovers over her in her bed, extending a claw to caress her. This same child’s decision at the end of the film to release the dinosaurs into the modern world can be read either as a parody or a celebration of naïve Europeans’ – and particularly women’s – childishness and erotic retardation in ushering in their own racial and cultural annihilation. She makes her momentous choice after discovering that she is a clone and not the person she thinks she is – which is to say, after having her sense of identity undermined.

Alternatively, Jurassic World: Fallen Kingdom can be read as an allegory about the danger inherent in providing succor to Jews. After rescuing the dinosaur-Jews from the volcano-Holocaust, western man is faced with the problem of how to survive with these troublesome creatures in his midst – an interpretation bolstered by an attempt to exterminate the dinosaurs with cyanide gas at the end of the film and which, furthermore, would put a somewhat different and perhaps self-revelatory spin on the aforementioned scene of the giant lizard in the little girl’s bedroom.