Darkest Hour is what you’d expect, a long and wordy biopic. If you’re a World War II history buff, you’ll probably love the attention to detail and incredible Winston Churchill speeches performed by Gary Oldman. However, there is one scene that almost ruined the entire movie. Winston Churchill decides to ride the train to get a feel for how the blue collar layman feels about Hitler and the war. A bit on the contrived side already, but digestible. Of course, there is a man of African decent on the train, sitting amongst white people. He’s even sitting next to a white woman and giving his input and joining in the camaraderie of the train car.

This might not seem egregious at first glance, but for a move that is set on being so historically accurate, this really pulls you out of the movie. Segregation laws were not enacted in the United Kingdom until the ‘Race Relations Act of 1965.’ While it may have been possible that a black man was on a train full of white people in 1940, it is highly doubtful. And even more unbelievable is his interaction with the other people and ability to speak up and be treated as an equal. In a movie where they probably got an expert for every tiny prop, down to the napkins they use at meals, it is jarring when this scene begins. This scene never actually took place in reality, I think they just needed a black person in the credits after ‘Dunkirk’ was chastised for not being diverse enough.

See Darkest Hour but just skip past the subway scene, it doesn’t add to the movie and it is obvious feel good Hollywood b******t. 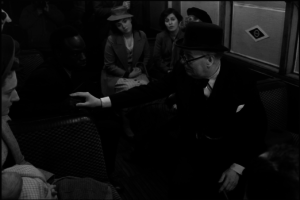