This was a pretty great film. Not gonna’ lie. It’s just sad that we can’t have these same themes in movies lead by white people and about my nation. One of the most popular animated movies (worldwide) was “Frozen” but the themes weren’t about the importance of familia, respecting your ancestors, unity, patriarchy, etc. like “Coco” was. Instead, if we’re lucky enough to get blue eyed blondes as leads at all, they have to denigrate the males and have protagonists spit on their traditions/culture. Buzzfeed puts it best: they are always “subverting the Disney formula:” 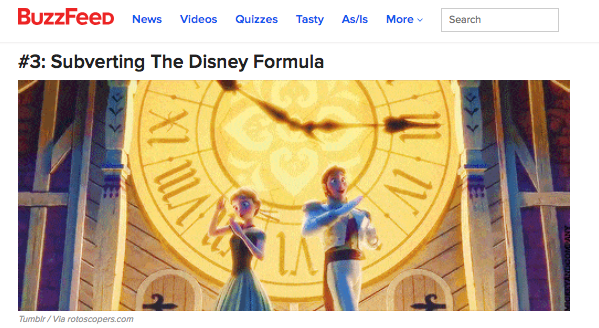 It’s just all so tiresome. So for that reason alone, you should not pay to support this film. But on top of that, they made it a statement about Trump. I did some digging and it turns out that “Coco” was in the works since 2010. I’m certain Trump’s election rhetoric made them drop everything and prioritize “Coco” but we’ll likely never know. It seems they announced production of the film right around the time that Trump seemed to be the likely winner of the Republican primaries. But even if it was all a big coincidence, all the people who worked on the film made several statements that made the film clearly an anti-Trump movie. Thankfully, though, the story was already established and nothing in the film itself is political. There were no allegories about walls or anything like that.

Well, I guess you could argue that Héctor being prevented from reuniting with his family was due to strong border control, but they don’t seem to demonize the border agents or the policy. Nor do they glorify it or make it a central point like “Black Panther” does. 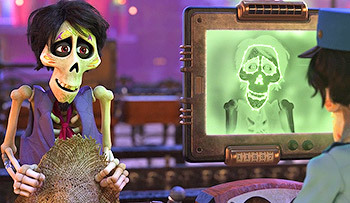 So, I think it was more of a relatable theme for the Mexican American target audience, but without the political commentary intended. Easy to ignore, and it didn’t even cross my mind until after the film. As for the affirmative action ratings, it’s tough to say. I’d honestly get bored with only European princesses with slight variations. We are all interested in exotic lands and have been since long before Hollywood. But clearly, Pixar/Disney are just going through a checklist of minorities to make movies about. At least it was a homogenous staff so no character felt out of place, or like they didn’t earn their spot as an actor. Which also allowed for more character depth, without screams of racism because they accidentally portrayed the one dark character negatively. It’s similar to “Black Panther” in that regard. Think Hollywood is learning multiculti doesn’t work well? Nah… Oh, and there are strong females but they were 100% accurate from my experience with hot blooded Latinas and their matriarchal grandma. Lastly, the anti-god ratings are only there because it portrays a different after life, and worship of ancestors. If you’re a strict Christian, this may bug you. But they don’t mention god once, and most Mexicans are Catholic despite this aspect of their culture. So it’s up to you…

All in all, consider this a point for Hollywood in the culture war. This was really well-made, visually stunning, and had a solid plot to boot. And as a nationalist, I really do support all peoples having pride in their culture. I’m not gonna’ give the cliché “I’m not racist, I have black friends” routine, because there’s no appeasing progressives with that, and because I am racist. Hell, unlike the champagne socialists, I lived and worked in the Mexican ghetto that they avoid like the plague. (Which in this case is fitting, because the cheap maids they import are sometimes literally bringing the plague with them…) I really enjoyed my time immersing myself in other cultures, and even picked up some Spanish while teaching cute ‘lil Mexican kids English. But travel and real world experiences made me racist more than anything else. Crime and welfare statistics don’t resonate as well as memories tied to the five senses. So yeah, I am both racist and I also want these people to thrive in their own communities.

This personal tangent is more of an appeal to my rightwing brethren who get blackpilled and spend too much time filled with hate. It’s hard not to when you’re politically woke. But I think it’s important to not get too caught up in the nationalist echo chamber, while purity cycling into hate & despair. A truly intelligent person should be able to foster the rage when needed, and lighten up upon command. There’s a reason George Soros funds Black Lives Matter and other such groups. The elites have a win/win strategy. They either divide and conquer us, or subvert the nation through migration. But it’s clear that the source of these problems, the puppet masters, are the politicians. These third world migrants are useful idiots just like AntiFa. I think a truly stoic, politically savvy, and socially effective person knows how to harness these emotions for good. Here are some great clips that I think you should keep in mind before seeing “Coco” so that you can enjoy it:

The Biggest Coincidence of All Time pic.twitter.com/2U9RW4ZPSd

But of course, this is how propaganda works. Even intelligent people see these movies and the sentimental stuff seeps into their brains. Public support for open borders or endless war, skyrockets when those pictures of dead/sad children evoke our paternalistic instincts. So don’t be fooled! Remember, they can keep their culture on the other side of our, great, big wall.

All I could think of when I saw the cover. pic.twitter.com/bJsvOKtJU8

This is what happens when people chant VIVA MEXICO on the 4th of July pic.twitter.com/d48aupQuEg 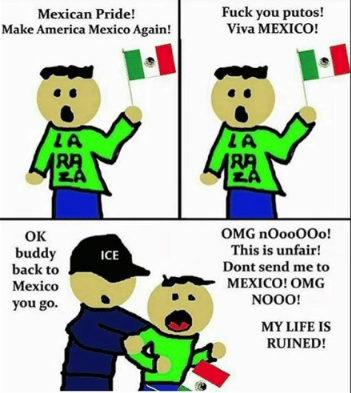